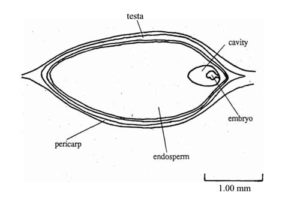 Poor seed germination in Actinotus helianthi can be attributed to a combination of lowered viability due to embryoless and undeveloped seeds, and to seed dormancy. However, in the majority of cases, seed dormancy appears to be the overriding cause of non-germinability of freshly collected seed. The seeds of A. helianthi appear to undergo after-ripening in dry storage at 21°C, with the optimum duration of storage lying anywhere between 2 and 12 months. Further work to investigate the effects of temperature, light, and humidity on afterripening are currently underway. The optimum temperature for germination of A. helianthi is between 15 and 20°C, with some germination occurring at temperatures between 10° and 30°C. Light promotes germination only at higher temperatures. The seed coat (testa) appears to play an important role in the control of dormancy in this species, but the exact nature of this role has yet to be elucidated.

In the wild, germination of flannel flower seeds would probably occur mostly during the autumn months when temperatures are lower, when more moisture is available for seedling growth, and after the seeds have had time to after-ripen following their dispersal during late spring and summer.