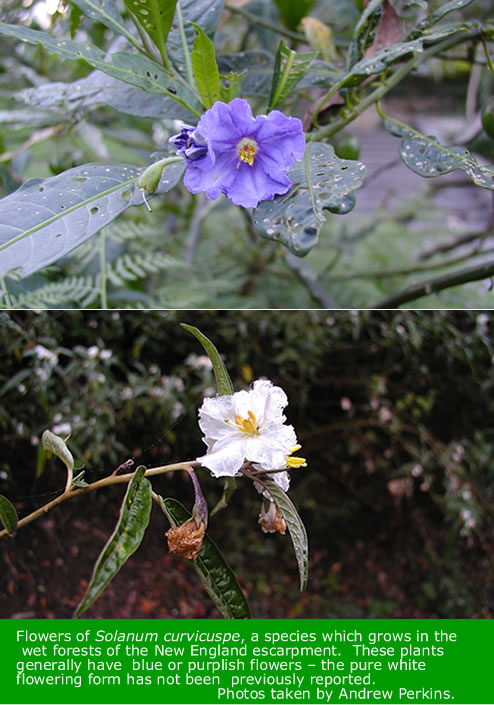 The flowering shrubs in the Solanum brownii group consist of of ten closely related species. They are endemic to coastal temperate Eastern Australia. They have attractive blue or purplish flowers of around three centimetres diameter, and are all prickly to a greater or lesser extent.

We attempted to select for plants with combinations of characters desirable for development as a horticultural ornamental, particularly, large flower size, reduced spiny-ness, attractive leaf form, and attractive growth habit.

Vegetative propagating material was collected from the New England tableland and escarpment, representing four species – S. neoanglicum, S. curvicuspe, S. brownii and S. nobile. Two species may have a prospect of being developed into horticultural ornamentals – S. nobile and S. curvicuspe. S. nobile comes from the tableland east of Glen Innes, and S. curvicuspe from the rainforest inland from Wauchope. S. nobile is the more attractive plant, with oak-shaped leaves, and upright, well-branched habit. Specimens differ widely in their priclkyness. S. curvicuspe has relatively large flowers, and fewer spines.

We discovered a previously-undocumented white-flowering form of this species.

At the time of writing (May 2008), flowering in cultivation of our selected plants has occured only sporadically; and we have not had fruit formation and seed set. Discovering how flowering can be induced in cultivation is our current goal in the investigation of these plants