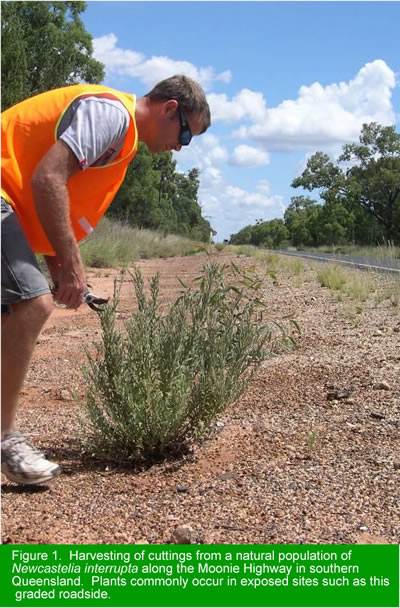 Newcastelia interrupta (Family Lamiaceae) is an herbaceous perennial plant endemic to southern Queensland. The numerous flowers exhibit a unique “cotton ball”-like calyx and are borne along the length of the fine but flexible stems. Previous work has identified N. interruptaas a potential cut flower crop. However poor plant longevity is an issue and has been attributed to the fungal root pathogen Phytophthora. Funding from the Australian Flora Foundation is currently being used to conduct a 2-year research project in which two approaches to the problem are being investigated: (1) grafting onto Phytophthora-resistant rootstock; and (2) inoculation of non-grafted nursery grown plants with beneficial soil microbes, namely arbuscular mycorrhizal (AM) fungi.

The research progress achieved in this first year of the project will be discussed in terms of the six objectives listed the original project proposal.

1. Expand the Newcastelia germplasm collection, for the purposes of this research
In March 2011 plant material was collected from a natural population of N. interrupta that occurs along a 20 km stretch of the Moonie Highway, approximately 200 km west of Dalby in southern Queensland. A collection permit was obtained from the Queensland Transport and Main Roads Department prior to this work. Plants predominantly occurred in exposed situations such as graded road shoulders (Figure 1) and sparsely vegetated areas. Colonisation of these harsh environments is achieved by the development of suckers (shoots arising from the roots of older established plants) up to 1.8 m away from the parent plant. To reduce the risk of collecting the same genotype twice, care was taken to select plants which were morphologically different to their neighbours or which were located several metres away from other N. interrupta plants. Cuttings from 50 plants and root samples from 10 plants were harvested from specimens that were at least 50 cm tall. Upon return to the UQ Gatton Campus, the cuttings were disinfested and placed in trays of propagation medium under intermittent mist. Root samples were washed and stored in 50% ethanol for later AM assessment. Severe cutting losses resulted in substantially lower plant numbers than initially expected. Of the 1500 cuttings propagated only 18 developed roots and survived beyond the tubestock stage (a survival rate of 1.2%). Cuttings were harvested from these plants on two occasions in a bid to boost plant numbers. These later propagation attempts were more successful, with rooting rates of between 33 and 100% observed for different genotypes. A total of nine genotypes are currently being maintained in 100 mm and 140 mm pots.

2. Select N. interrupta genotypes amenable to cutting propagation, for future use as scion material
The intial aim was to select 10 genotypes which performed the best in terms of cutting rooting rates for use in the grafting trial. The severe cutting losses reported above have limited the germplasm collection to nine genotypes. Subsequent propagation attempts revealed that some genotypes have consistently low rooting rates and are unlikely to provide sufficient material for future trials. Hence, the best five genotypes will be used in the grafting trial and AM pot trial, but with greater replication where possible.

4. Evaluate grafted versus non-grafted N. interrupta plant longevity in the ground (provided grafting is successful)
The abovementioned delay will mean that in-ground trialing of the grafted plants is not likely to commence until late 2012. Hence an extension of the project duration may be necessary to ensure that the trial outcomes can be reported. In that case, prior approval from the AFF will be sought.

5. Detect N. interrupta mycorrhizal associations (if they exist) in plants from natural populations 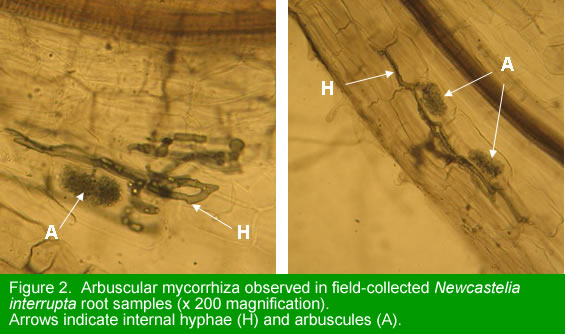 The root samples collected from plants in the field were assessed for the presence of AM associations. The roots were cleared by autoclaving in 10% KOH solution and stained using 0.03% Chlorazol Black E. Microscopic examination revealed the presence of fungal hyphae and vesicles within the roots of all samples. Arbuscules were clearly visible in four of the ten root samples (Figure 2). The presence of arbuscules confirms that N. interrupta is capable of forming AM associations and provides justification for trialing commercial AM fungi formulations (Objective 6 below). This is the first known report of mycorrhizal associations in the genus Newcastelia.

6. Demonstrate the efficacy of commercial arbuscular mycorrhizal (AM) fungi formulations on non-grafted N. interrupta longevity in pot culture
This research will commence in 2012.