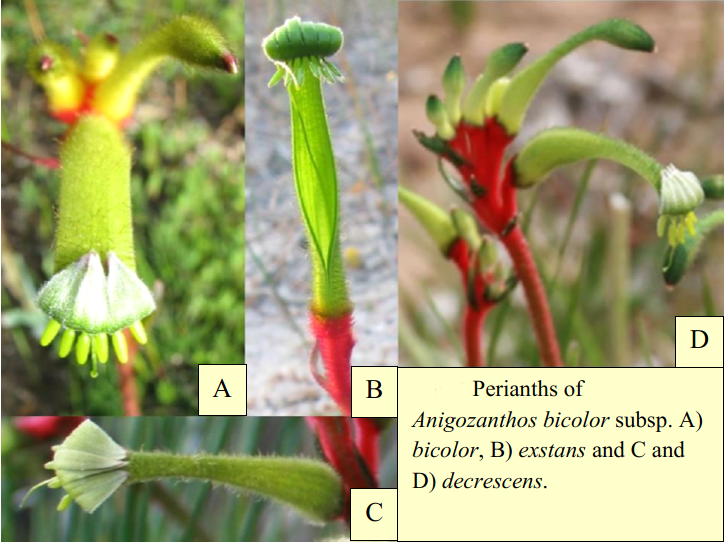 The Kangaroo Paw, Anigozanthos manglesii subsp. manglesii, is an iconic Western Australian wildflower. However there are 20 Kangaroo Paw and Catspaw taxa in the genus Anigozanthos, and many of them are much less well known. The primary aim of this project was to understand the germination requirements of the lesser known Kangaroo Paw and Catspaw taxa to increase awareness of these taxa and assist in their conservation and use in horticulture and land rehabilitation. Seventeen taxa were examined in this study. The more common Anigozanthos taxa were included for comparative purposes.

Germination tests were undertaken on freshly collected seed, after soil burial and after a period of laboratory storage. Heat treatments were also undertaken on seeds prior to imbibition. Germination of freshly collected seeds of the 16 taxa examined was negligible or low, indicating that a high proportion of seeds were dormant at maturity. Seed burial for one year, commencing in the autumn after collection, was most effective at alleviating dormancy and enabling germination stimulation in smoke water in A. manglesii subsp. manglesii. This burial treatment also resulted in some A. flavidus seeds germinating in nitrate or smoke water in the light. However for the remaining six taxa examined, this duration and timing of burial was not an effective means of alleviating dormancy. Likewise germination did not exceed 15% in any of the eight taxa buried at the time of seed maturation and exhumed 3 to 4 months later, except for A. viridis subsp. Cataby seeds treated with smoke water. Longer periods of burial, possibly extending over at least two summers, were probably required.

During storage at approximately 22°C for 3 to 3.5 years, dormancy was alleviated and smoke water stimulated higher levels of germination than water in 11 of the 17 Anigozanthos taxa examined. In six taxa, including lesser known taxa such as A. manglesii var. x angustifolius, A. viridis subsp. Cataby and the conservation priority listed A. bicolor subsp. exstans, smoke-stimulated germination exceeded 49%. Heat pre-treatments at 100°C were also effective in promoting germination in most Anigozanthos taxa except A. rufus. For most taxa germination was higher following one rather than three hours at 100°C. Germination of 12 of the 17 taxa examined was >30% following the 100°C for 1 h heat treatment, and >50% in six of these taxa. These six taxa were not all the same taxa that produced the highest levels of germination following storage and smoke treatment, and included lesser known species such as A. bicolor subsp. bicolor, A. gabrielae and A. preissii. Therefore there are a number of methods that can be used to maximise the germination of these intriguing Anigozanthos taxa to assist in their conservation, and use in horticulture and land rehabilitation.