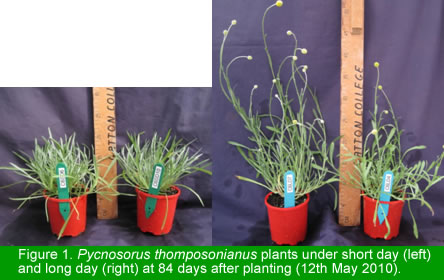 The diversity of flowering responses reported means that each species requires investigation of the effect of environmental factors on flowering to enable manipulation of flowering time especially if species are to be used as potted colour products. In addition it is important to understand juvenility and determine when the seedling is able to perceive the flowering signal as well as quantifying the effect of environmental factors on flower induction, initiation and development. Environmental factors also influence plant habit particularly height and branching and this can influence the number of flowers per plant and hence plant quality. Plant growth regulators can be used to modify plant habit and may also influence flowering (King et al. 2008).

The first study on Brunonia australis R. Br (Goodeniaceae) and Calandrinia (Portulacaceae) investigated the role of daylength and growth regulators, Gibberellic acid (GA3) and paclobutrazol (Pac), to control vegetative growth, peduncle elongation and flowering of Brunonia and Calandrinia. Plants were grown under long days (16h), short days (11h) and 8 weeks under short day then transferred to long day (SDLDs). Plants in each daylength were treated with GA3, Pac, and GA3+ Pac. GA3 was applied as 10 µL drop of 500 mg L-1 concentration to the newest mature leaf. A single application of Pac was applied as a soil drench at 0.25 mg a.i. dose per plant.

Both Brunonia and Calandrinia flowered earlier in long days but still flowered in short days, so both can be classified as facultative LD plants. Brunonia under SDLDs were more vigorous and attractive than plants under LDs while still being more compact than plants under SDs. In Brunonia, GA3 promoted earlier flowering and increased the number of inflorescences under SDs. Pac at 0.25 mg a.i. per plant applied alone or in combination with GA3 delayed flower development in Brunonia, and resulted in a reduced number of inflorescences per plant compared to the control plants. Vegetative growth of Calandrinia was similar under LDs, SDs and SDLDs, whereas GA3 application increased plant size. Pac-treated Calandrinia looked compact and attractive, and Pac application did not affect time to flower and flower number.

The second study investigated the flowering responses of Pycnosorus thompsonianus (Asteraceae), to daylength and temperature regimes. Plants were cooled at 20/10°C or kept at 30/20°C for 21 or 42 days under short day (SD), long day (LD), or short day for six weeks before transfer to long day (SDLD).

Similar to Pycnosorus, plants of R. floribunda flowered without chilling showing a facultative requirement for low temperature. Plants were competent to perceive chilling as one day old seedlings. Chilling for 21 days was the most effective treatment, reducing time to first visible floral bud (FVFB) and anthesis and increasing inflorescence number by 100% at 23 weeks. Chilling for seedlings at 4 week old stage increase flowering of by 4-5-fold.

The number of growing degree days (GDD) from transplanting to FVFB and anthesis of 3 week chilled plants of R. floribunda was found to be shortest among chilling treatments with 419 and 628 degree days, respectively. These could be used to guide for commercial production to reduce production time by chilling plants at seedling stage (4 weeks old) for 3 weeks under 20/100C.