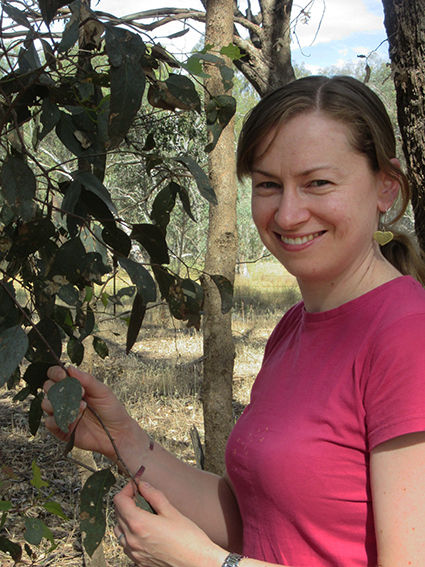 Received the Australian Flora Foundation Young Scientist Award for her outstanding
talk at ESA15. The conference was held in Adelaide at the Adelaide Hilton from November 29-December 3

To ensure evolutionary resilience under climate change, successful revegetation relies on capturing high levels of genetic diversity and thus adaptive potential. As the traditional use of exclusively local material is challenged, understanding species’ adaptation to climate will be critical for determining seed sources for robust revegetation into the future. In Australia, Eucalypts are a dominant species across many landscapes and are extensively used in revegetation. However, knowledge of genomics underlying adaptation is limited, with current genomic climate adaptation research in trees focusing predominantly on northern hemisphere species. Utilising the power of genomics, we employ DArTseq, a reducedrepresentation genomics approach, to investigate genomic diversity and adaptation in Eucalyptus microcarpa, an important revegetation species used extensively across agricultural south-eastern Australia. In particular we compare the genomics of natural stands to revegetated sites and fragmented sites – common seed sources in modified landscapes. This works aims to assess how well current revegetation strategies have captured both neutral and adaptive genomic diversity, and thus adaptive potential. Differing results between diversity within and differentiation between sites suggests that, at the landscape level, not all variation is being captured or maintained in fragmented and revegetated sites. Through this case-study, we demonstrate how genomics can provide deeper insight into the genomics of revegetation – beyond general genetic diversity, and towards comparisons of neutral versus adaptive genomic diversity and thus adaptive potential; knowledge that will assist in improving seed sourcing strategies and evolutionary-resilience of future revegetation efforts.

Biography: Rebecca Jordan is a PhD candidate investigating climate adaptation in the Grey Box Eucalypt (Eucalyptus microcarpa). Her project aims to improve conservation and revegetation efforts by increasing understanding of climate adaptation at both genomic and quantitative trait levels, as well as comparing genomic diversity within natural and revegetated sites.