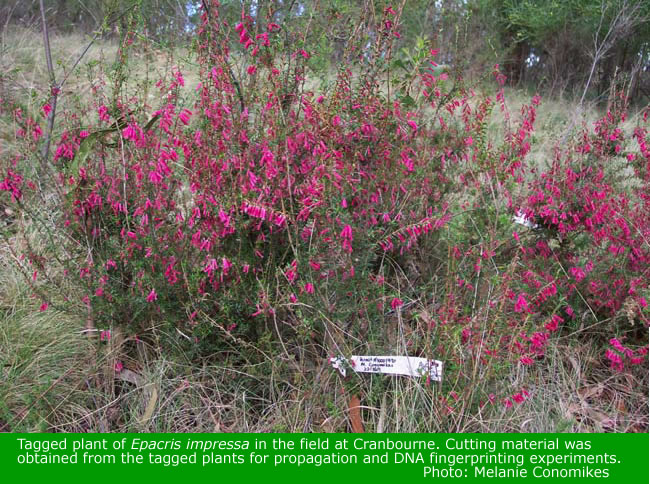 Epacris impressa Labill. is an attractive heathland shrub endemic to the state of Victoria, parts of South Australia and Tasmania and southern New South Wales. The plant has showy red, pink or white flowers for most of the winter and has potential markets in landscaping and revegetation, as well as a cutflower. Flower colours fall into three general flower colour races: red, pink and white (Stace & Fripp 1977a, 1977c, 1977b). Like all members of the Ericaceae, E. impressa forms a symbiotic relationship with fungi that colonise its hair roots. It is primarily an outcrossing species with some examples of selfing occuring in each population (Fripp 1982; O’Brien, S. P. & Calder 1989).

Few nurseries propagate E. impressa since it has proved difficult to grow from cuttings or seed. Strike rates are often as low as 10% for cuttings and seed germination often fails. Selection of propagation material for revegetation purposes is usually determined by local anecdotal information and provenance delineation is not based on genetic traits.

This study examined the use of ericoid mycorrhizal fungus as an inoculum to stimulate root and shoot production from cuttings. The fungus did not provide any benefits to root and shoot growth or health, but methods for improved propagation success rates were developed during the experiments.

Genetic fingerprinting techniques were also used to examine relationships between geographic sites and flower colour populations and to aid in provenance determination. Results indicated that E. impressa has a high level of both inter-site and intra-site genetic diversity. The red and white floral races had a high level of shared genetic traits while the pink-flowered race had a more distinct genetic identity. The results suggested that the pink-flowered populations have developed into a separate floral colour race rather than an F1 hybrid between red and white races.