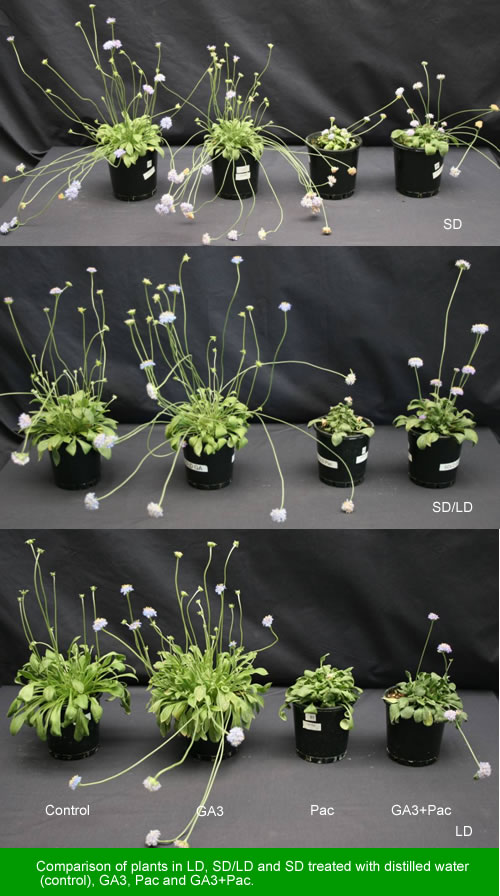 Progress report on the grant:

Brunonia australis and Calandrinia polyandra, two Australian native flowers, have considerable potential to be developed as flowering pot plants. As flowering pot plants, a compact form is desired with flowering aligned with target peak demand periods. However, as new products, information on the flowering physiology of these two species, required to modify the natural flowering season is limited. This research therefore investigated the role of daylength and growth regulators, gibberellin (GA3) and paclobutrazol (Pac), on flowering and plant habits of Brunonia and Calandrinia.

Seeds of Brunonia and Calandrinia were germinated in a greenhouse. Five days after emergence, seedlings were transferred to a controlled-environment research greenhouse at 25/10°C (day/night) for three daylength treatments, LD (16h), SD (11h) and SDLD (8 weeks under SD then transferred to LD). Plants in each daylength were treated with GA3, Pac, GA3+Pac or distilled water (control). GA3 was applied every fortnight as 10µl drop of 500 mg/l concentration to the newest mature leaf. A single application of Pac, when 50% of plants in each daylength treatment had a visible flower bud was applied as a soil drench at 50 mg/l concentration and 5 ml dose per plant. The GA3+Pac treated plants were treated as plants receiving a single growth regulator. A completely randomized design was used with 15 replicates for Brunonia and 7 replicates for Calandrinia.

Both Brunonia and Calandrinia flowered earlier in LD but still flowered in SD, hence both can be classified as facultative LD plants. GA3 promoted earlier flowering under SDLD and SD in both species, while Pac delayed flowering under SDLD and SD in Brunonia but not in Calandrinia. GA3 increased and Pac decreased the number of inflorescences in Brunoniaunder SD, implying that GA3 enhances flowering under SD. In Brunonia, GA3 did not increase, while Pac greatly decreased, the mean length of inflorescences at anthesis, plant height, and width compared to the control, indicating that the Pac dose was too high. When GA3+Pac was applied, plants were intermediate for all characteristics, suggesting that GA3 partially counteracted the growth inhibition effects of Pac. In Calandrinia, GA3 increased plant height and width while Pac decreased plant width compared to the control. The rate of Pac applied to Calandrinia was appropriate as plants looked compact, attractive and flowering was not delayed. For commercial production of Brunonia, 8 weeks of SD followed by LD is recommended, with Pac applied at 2 ml at a dose of 50 mg/L, once flower buds are visible. Calandrinia showed the desired compact form so the rate of Pac recommenced is 5 ml at a dose of 50 mg/L.