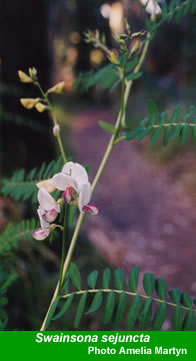 The potential for indigenous species to establish outside their natural range and become weeds is less well recognized than the potential for exotic species to become weeds. In this study, the weed potential of a native Australian legume, Swainsona sejuncta Joy Thomps., was assessed using weed risk assessment protocols (Pheloung 1995; the ‘Pheloung system’) and germination experiments. The Pheloung system uncovered several traits indicating that S. sejuncta has significant weed potential. These traits include production of the toxin swainsonine, a short generative time, production of large numbers of viable seeds, and formation of a dense canopy. The species appears to benefit from cultivation, and seedlings emerged along paths surrounding garden beds. The Pheloung system did not give a definitive outcome for rejection or acceptance (high or low weed potential, respectively) but indicated that further evaluation is required. However, if S. sejuncta naturalises outside its limited native range in the future, then the species would be considered to have a high weed potential. Experiments in addition to the Pheloung system showed that S. sejuncta germinated rapidly over a wide range of temperatures once the seed coat was broken, reflecting a high competitive ability. Consequently, cultivation and commercialisation of S. sejuncta as an ornamental plant is not recommended without further research.