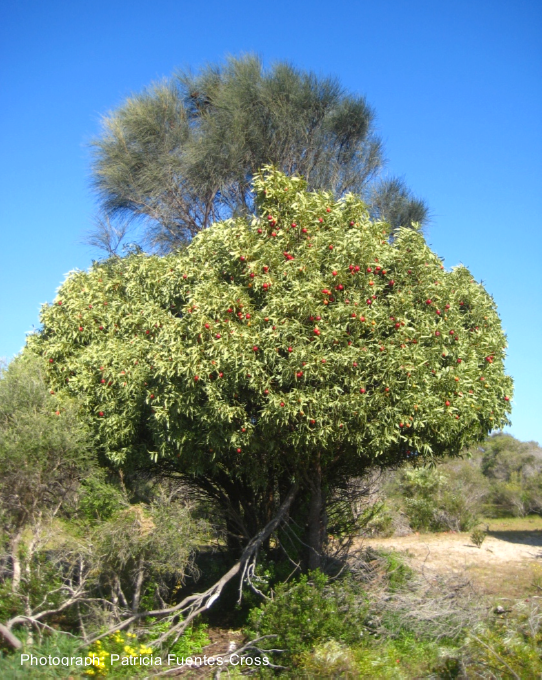 The quandong (Santalum acuminatum) has a natural distribution across southern Australia. This geographical distribution encompasses a variety of habitats ranging from coastal, high altitude ranges to desert landscapes. Many dispersal vectors contribute to the mobility of quandong throughout the landscape, such as small mammals, birds, and humans. As an important plant for humans, the quandong has been subject to constant trading and movement across its natural range for centuries, facilitating the species’ mobility across very large distance. The morphology of quadong is variable. Some specimens from the Nullarbor plain, a geologically distinctive region shared between South Australia and Western Australia, exhibit intermediate traits between S. acuminatun and its sister species, S. spicatum. This so-called Nullarbor form is thought to be a hybrid between these species and has been noted as a good rootstock in some plantations in South Australia. Because of its long history among the people of Australia and the efforts for its continued cultivation, we considered it crucial to conduct an assessment of what genetic diversity exists in wild populations of quandong in South Australia and to find out if the Nullarbor form is indeed a hybrid. This is part of a larger project exploring genetic diversity in the quondong and the wider genus.

Wild populations in the South Australia Nullarbor region were collected and genotyped using High Throughput Sequencing (HTS) techniques with the Ion Torrent platform (PGM and Ion Proton) to determine potential hybrids in the Nullarbor populations and to estimate genetic diversity. Single nucleotide polymorphisms (SNPs) were detected and used as markers to begin to develop an understanding of the genetic diversity of quandong. The Santalum acuminatum Nullarbor form, does not appear to be a hybrid and we determined the baseline genetic diversity to further assess extant populations as they are quite scarce, potentially making specimens rely on other reproductive factors such as vegetative propagation, which can have an impact on genetic diversity.

As a semi-cultivate, quandong can face challenges to its long term successful cultivation due to climate change, introduced fauna and other human-induced changes to the landscape. It is important to conserve extant wild populations to ensure the future survival of the species and related species in the genus. The results suggest that continued research of quandong and its relatives, particularly in the dry lands of South Australia, are necessary to preserve its seed banks and with this assist in continued improvement of quandong in cultivation.