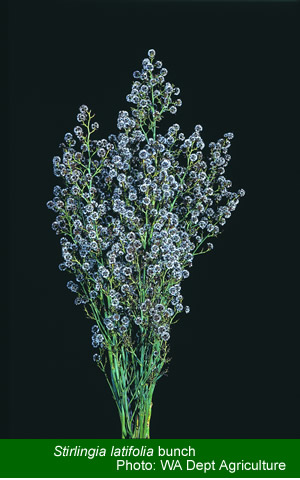 Stirlingia latifolia is one of the most important crops currently bushpicked for export yet the horticulture and biology of this crop is still poorly understood. Knowledge of the flowering biology of S. latifolia helps us understand why so few ‘‘bobbles’’ are produced in relation to the apparently large number of flowers. Studies of growth and flowering have shown how important fire is in regeneration of this species, but pruning and clipping trials have failed to duplicate this response. In pot trials, S. latifolia responds to applications of nitrogen, potassium and phosphorus and it is likely that a significant part of the growth response following fire is due to a renewed supply of nutrients.

For propagation the best cutting material is from new sprouting material of Stirlingia latifolia following a fire or perhaps other disturbance. Or better still use in vitro shoots, preferably unrooted as the number of roots per propagule following auxin treatment appears to be superior to in vitro rooted shoots and much better than conventional cuttings. Clonal differences may have a bearing on success with this species and further testing on different populations of Stirlingia latifolia would be advisable before commitment to procedures followed in this study.

Much of the research conducted to date and reported here has focussed on S. latifolia as a member of the Proteaceae and also as a typical resprouter. The implications of these findings are discussed in the context of S. latifolia as a potential row crop and quality export floral product.