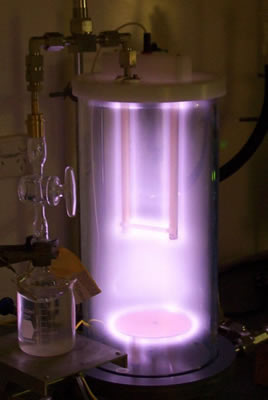 A significant number of Australian plant species have adapted to an ecology in which periodic bush fires play a key role. Some species, particularly in the Fabaceae family, have evolved hard protective seed coats. Such hard seed coats, however, present challenges for the germination of such species. While a number of methods for their germination have been used, all have some disadvantage, which affect the use of such species in habitat restoration, ex-situ conservation, and horticulture. In this project, we have investigated a novel physico-chemical method for the treatment of seeds of Australian plants. The treatment may have two benefits: improved germination of seeds that do not germinate well without treatment (e.g., Fabaceae), as well as enhanced survival of seedlings via the effective killing of fungal spores on seed coats during treatment. Improved germination rates and decreased rates of fungal attacks will benefit the cultivation and conservation of various Australian native plant species, in particular those that traditionally have resisted high-yield germination by other methods and those whose seed numbers are so limited that effective usage of available seeds is essential. The approach we have used employs a gas plasma analogous to the etching of synthetic polymers in the semiconductor industry. Low pressure oxygen plasma exposure was used to treat seeds of a number of Australian plant species. Changes in the seed coat were investigated using swelling, measurement of seed coat thickness, and germination experiments. The treatment was effective for the germination of seeds of species such as Kennedia rubicunda (Vent.) whereas seeds of species such as Banksia speciosa (R. Br.) germinated equally with and without treatment. Microscopy showed no measurable changes in seed coat thickness; the effect of the treatment thus probably is an enhancement of water permeability through the seed coat. With the limited number of seeds, no effect could be observed of the treatment on possible destruction of damping-off fungal spores. A small number of plants were grown on in order to test for possible effects of the treatment on genes; no differences were observed in the morphology of the plants nor in their growth rates.