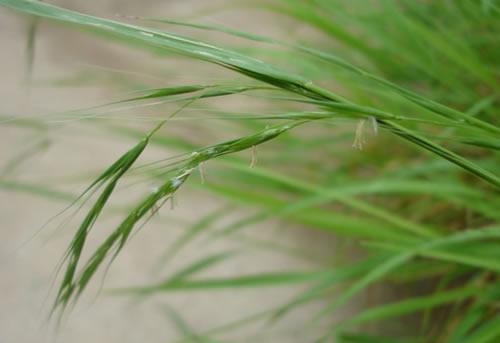 There has been a lot of discussion about the impact that climate change will have on native plant species. There are suggestions that isolated populations will dwindle and die if temperatures increase, and other suggestions that changed temperature and rainfall conditions will be easily accommodated by the native species because they will have experienced these conditions at some stage earlier in their evolution. To address these issues the genetic variability of a model species of native grass, Microlaena stipoides, also known as Weeping grass or Weeping rice grass, was examined.

A collection was made across Victoria from naturally occurring populations along an east-west transect that started in central Melbourne, over Mt. Baw Baw and continued on to the Bass Straight coast near Paynesville. Almost 40 distinct populations were collected and assessed for their variability in a gene that is known to be involved in defence against stresses such as fungal attack. The more variable a gene is within a population the more able it is to tolerate varying climatic and other stress conditions.

The results showed several things. Firstly, plants in the high altitude and rainfall zones were less genetically variable than those from the lower altitude and drier conditions. Secondly, plants occurring in those areas that had been subject to disturbance by farming or logging were more genetically variable, and hence flexible, than those that occurred in undisturbed or natural conditions. Thirdly, this model species does not appear to be threatened by changing temperatures and rainfall but indeed has sufficient internal variability to withstand significant climatic change.

These results are consistent with some other wild grass populations seen elsewhere and suggest that those native grasses that are present in drier environments are likely to possess more genetic variability, both within individuals and within populations, than those from higher rainfall zones. The impact of human disturbance on genetic variability within this species is of great interest and is worthy of following through in greater detail.

The greater diversity of populations in more marginal environments indicates the importance of conserving these populations and not just those in favourable environments.