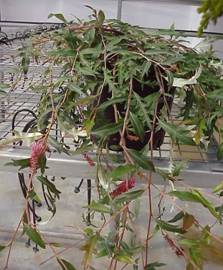 Grevillea (Proteaceae) is one of the woody Australian native species that have high commercial value in the floriculture market. Grevillea spp. vary greatly in their ease of propagation from cuttings, and some Grevillea cultivars are generally considered to be difficult-to-root. Efforts to improve propagation success will be essential in the development of these species for commercial production. The objectives in this study were to study the response of Grevillea cuttings to auxin application, and to determine whether or not rooting differences between difficult and easy-to-root cultivars can be explained by differences in the endogenous auxin levels, or the capability to take up and transport applied auxin.

GC-MS analysis was used to measure the levels of auxin in the rooting zones. The level of auxin in the endogenous pool was measured by adding 13C-labelled IAA (13C6-IAA) and 13C-labelled IBA (13C6-IBA) as internal standards for quantitative mass-spectral analysis. The cultivars G. ‘Royal Mantle” (easy-to-root) and G. ‘Coastal Dawn’ (difficult-to -root) were used for the comparisons. The capacity for auxin transport in cuttings of the two Grevillea cultivars was estimated by applying labeled auxin with high specific activity (3H-IBA, Bioscientific Pty) to the cuttings. Distribution of radioactivity was determined in the base of the cuttings, their leaves and the rest of the stems harvested at various periods after applying auxin.