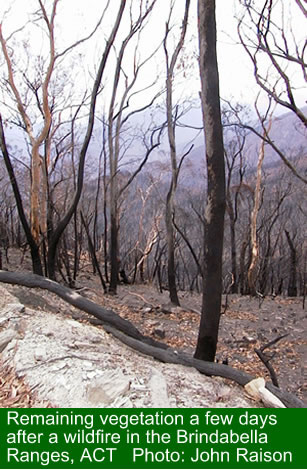 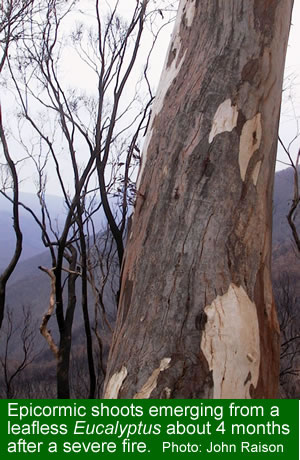 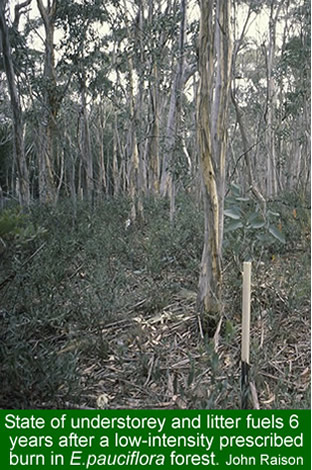 The following synthesis of knowledge has been prepared by CSIRO. The Australian Flora Foundation funded collection of some of the data on the re-accumulation of litter and understorey biomass following prescribed fires in sub-alpine eucalypt forests in the ACT.

A range of fuel characteristics have been included in recent fire behaviour models, which incorporate changes in structure and composition that occur with time since last fire (McCaw et al. 2003). These fuel characteristics include quantity, condition and height distribution of fine fuel, the quantity and arrangement of understorey, and the condition of bark on standing trees. A spatial and temporal description of fuel is fundamental to assessing fire hazard and risk across a landscape. Characterisation of all sources of fuel – litter layer, ground layer, understorey, bark and coarse woody debris – includes description of quantity, structure, composition and continuity, which influence fire behaviour and thus suppression difficulty (Gould 2003).

The quasi steady-state mass of accumulated litter has been estimated for a range of forest types. This ranges from about 15 t/ha in low altitude open forests to about 25 t/ha in mature, high-altitude wet sclerophyll forests (Australian National University Resource and Environment Consultant Group 1973; Cary 1997). The dynamics of another important fuel component – stringy and ribbon bark on tree trunks which form firebrands and result in spot fire development – is less well understood, but its importance for fire behaviour and hence difficulty of fire suppression is discussed by Ellis and Gould (2004).

The rapid accumulation of litter on the forest floor results in a rapid increase in fire risk in sub-alpine forests (Raison et al. 1993). It is clearly not practical or desirable to maintain low fuel loads (<10 t/ha) throughout the entire forest over time. This would require burning at intervals of about 3 years, which would threaten other values such as nutrient cycles, tree recruitment, and development of understorey habitat. As an alternative to broad-scale burning, a strategy involving exclusion of prescribed fire from sensitive areas, and use of rotational prescribed burning applied across selected areas of the landscape is suggested. For example, if a fire rotation of 12 years (compatible with maintenance of nitrogen (N) cycles) is adopted in those forests subjected to rotational burning, at any time 25% of the area will contain fuels less than 3 years old. A mosaic of areas with varying degrees of fuel reduction can thus be created at critical locations within the landscape to assist fire control (increase opportunity for initial containment, or suppression during moderate weather). Strategically-placed buffer zones that are more frequently burnt can also be used to complement less-frequent prescribed burning in the majority of the forest. Clearly, fuel management is only one part of good management planning for control of wildfires. Adequate capacity for detection and suppression are also critical.

It is significant that the partly combusted and fragmented litter which remains after low-intensity prescribed fire becomes incorporated into the soil within 1-2 years and hence does not contribute to re-accumulation of available fuel and subsequent fire risk (Raison et al. 1986). By burning when the surface soil and lower litter layer are moist, a thin cover of litter with a mass of 4-8 t/ha can be retained. Incomplete combustion of the litter is desirable because this lowers transfer of nutrients to the atmosphere during burning, prevents direct loss of organic matter and N from surface soils, and reduces erosion potential. Earlier work has shown that retention of ground cover equivalent to about 8 t/ha can be valuable in protecting against soil loss in erodible landscapes (Gilmour 1968; Raison et al. 1993).

The pattern of fuel re-accumulation after wildfire is more poorly understood, but will depend to a significant extent on the intensity of the wildfire and on the post-fire rainfall that drives the rate of vegetation recovery. If wildfires are very intense (leaf consumption in crown fire), Eucalyptus delegatensis trees are killed, and species such as E. pauciflora and E. dalrympleana (Mountain Gum) can be either killed or be so badly damaged that only basal re-sprouting occurs. Slightly less intense wildfire often leads to epicormic re-spouting in tree species other than Alpine Ash.

Where tree damage has been severe, litter input in subsequent years is greatly reduced but there may be compensating growth of understorey (observed increases in grasses and woody shrubs). Crown scorch can increase leaf fall soon after fire, but then reduce it for several years compared with unburnt forest. Wildfires clearly reduce the mass of coarse woody debris (large branches and logs) on the forest floor, and consume much bark (potential firebrands) so that the risk of spot fire development will be reduced for many years. There exists a good opportunity to measure the rate of fuel development after intense wildfire in representative vegetation types in the ACT. Funding should be provided to collect this critical information.