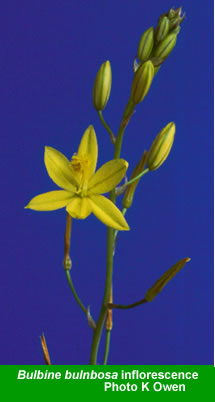 Many flowering plants are self-sterile and produce few seeds following self-pollination compared with cross-pollination. Two mechanisms of self-sterility that have been proposed are physiological self-incompatibility (SI), a genetically controlled self-recognition system which reduces self-fertilisation, and early-acting inbreeding depression (ID) in which selfed embryos homozygous for deleterious recessive alleles abort during development. Distinguishing between SI and ID is a critical issue because inbreeding depression pre-empts ovules and reduces the likelihood of cross-fertilisation. This can be achieved if the SI mechanism is either of the well known forms, gametophytic or sporophytic SI, as they act pre-zygotically. However, distinguishing between the lesser known, late-acting SI and ID is more problematic. Seed abortion appears to be a major factor contributing to low seed set following selfing in the lilioid monocot, Bulbine bulbosa (Asphodelaceae). We used histological techniques to determine whether self-sterility is due to SI or ID. Ovules were examined at 2, 5 and 7 days after flowers were pollinated with either self or cross pollen. For ovules examined at 2 days post pollination (PP) results reveal high levels of fertilisation following both self- and cross-pollination (both around 70%), indicating that the self-sterility mechanism is post-zygotic (Fig. 1a & b). This eliminates either gametophytic or sporophytic SI. Observations of selfed vs. crossed ovules at 5 and 7 days (PP) provide evidence of abortion following selfing (Fig. 1c & d). These results are consistent with early-acting inbreeding depression being a mechanism controlling self-sterility in B. bulbosa. However, a late-acting or postzygotic SI mechanism cannot be eliminated.