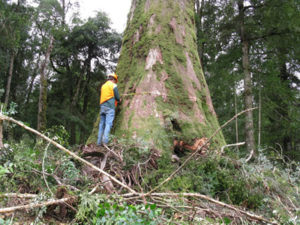 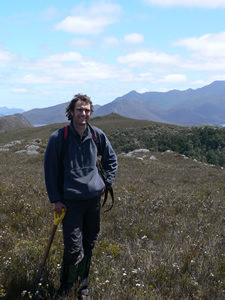 Received the Australian Flora Foundation Young Scientist Award for his talk at ESA2010, the Ecological Society of Australia Conference on 6 – 10 December 2010 at the Manning Clark Centre, ANU, Canberra.

Temperate old-growth forests contain some of the highest above-ground stores of carbon. The ecology of many temperate forests is dominated by episodic disturbance, such as high intensity fire. Eucalyptus regnans forests are particularly carbon dense and are adapted to infrequent catastrophic fires. Understanding the growth and longevity of old-growth trees is crucial to understanding the carbon balance and fire regimes of these forests. In an old-growth E. regnans stand in Tasmania we used dendrochronological techniques and radiocarbon dating to determine the age and stem growth of E. regnans and Phyllocladus aspleniifolius, an understorey rainforest conifer. Our analysis revealed that an even-aged cohort of E. regnans and P. aspleniifolius established in 1490-1510AD, apparently after a stand replacing fire. Growth rates of E. regnans were rapid compared to P. aspleniifolius. That the longevity of E. regnans is > 500 years challenges the 350-450 year timeframe proposed by the traditional model of succession from eucalypt to rainforest. These forests not only store vast amounts of carbon, but also maintain high carbon densities for a long period of time. Estimates of the capacity of temperate forests to store carbon should consider past fire regimes and increased fire frequencies associated with climate change.